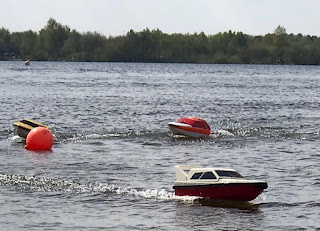 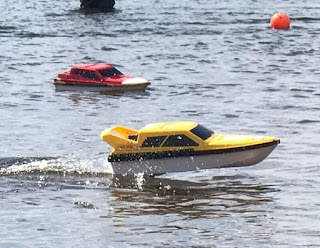 Sunday morning dawned bright but breezy and a bit chilly.

The day kicked off with young Ethan showing us old blokes that he would be a force to be reckoned with in the future as he steered his little Volantex boat around the buoys with great skill.

A good turnout of eight Club 500 racers meant that some good racing would be had but unfortunately some people’s day ended quite prematurely. Pat failed to get out of the starting blocks but very kindly spent the morning acting as boat rescue, standing out in the water by the faraway buoys.

Not sure what happened to Andy’s efforts but it was either his or Daryl’s boat that sustained some quite severe damage ruling them out for the rest of the event.

Meanwhile it was business as usual for those that kept their boats in one piece. First blood went to Stu as he just pipped Terry to the post by about one yard.

Two wins went to Piers as he recovered some of the form that seemed to have abandoned him at the last meeting and Simon scored his first heat win helping his effort and keeping him in the top three overall position.

Phil’s boat spent most of its time upside down but when he kept it the right way up he managed a fine third place in the second heat.

And all too soon another great morning of racing came to an end.

Special thanks to Simon for feeding everyone with some very tasty and welcome BBQ’d hot dogs.

Thanks to those that did the scoring and thank you to Lorraine and Sara for some great pictures.

See you all next time when hopefully my back will be in a bit better shape.