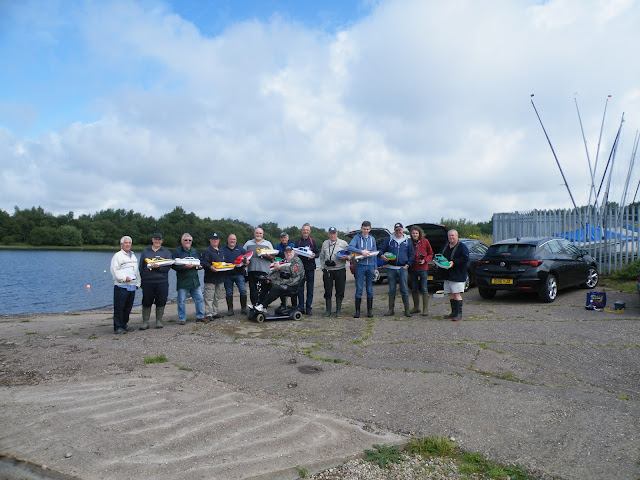 Sunday 23 July, weather grey and raining. Saw the 1st leg of an interclub 500 race against our newly formed local club Aldridge mbc.
Tony, Terry and myself arrived at the Chase water leg and it had stopped raining at 9 am so we took Tigger into the water. We found a weed free stretch and Terry laid the course approx 35 metres long  with the wind blowing back to shore thus minimising the use of a recovery boat.
Our visitors arrived around 9.45 as promised, were welcomed and thanked for making the journey. Brian Morris,Tony Butler, Rod Upton, Sid Sims and Les Prew  were issued white markers to attach to their hulls for identification when racing. They were all in good spirit and humour and set about preparing their boats, our guys were arriving by then, Phil, Piers, Vaughan and Mark and we attached black markers to our hulls. The markers complete with Velcro were supplied by Mark, thank you.
Ed, after a lie in, was ready to do the scoring as he does regularly for our races and Don was there and took some photos for posterity, which we will post soon, many thanks to both. Jack came to support Tony and the rules were agreed and the times set at 4 mins per race the team completing the most number of laps was deemed to have won. Terry had the timing set and the first race started like the charge of the Light Brigade all aiming for the first buoy.
The race was even and competitive with no carnage and not many knocks, as could have happened. A good clean race saw our visitors narrowly beating us 6.8 to 6.7 however one of our team called out the wrong colour for 2 laps (no names).
The other five races were held, some boats being rolled some breaking down and some just out of control but all taken in a light hearted manner and all being won narrowly by the home Chase water team.
The banter was humorous, it was relaxed and fun, with both teams enjoying each others company and the excuses from both teams was entertaining.
To be fair our team used Lipo batteries and i`m told that Aldridge used Nimh`s, so it was decided to have a last race all using Nims. Only 4 from Aldridge and 3 from Chase water took part with Aldridge winning hands down. It was all pretty even to start but we had not charged our old batteries and our boats going slower and slower with only 1 finishing.
We had a very good enjoyable time and made some new friends, we look forward to arranging a return at Stubbers Green later in the year.
Thank you to all that took part and helped, we cleared up and went home by 1pm.
Patrick.

* Maybe as a peace offering, CMBC ought to run Nimh's when the return match takes place @ Aldridge *
That said, many congratulations and thanks to all that attended and supported this event.
Hopefully it may lead to further interclub sailing....of other classes too.