Skip to main content
on November 18, 2016
Just a short report for the blog from last Sunday`s meet 13/11
Nice but cold morning, water pretty flat enabling some great fast runs by Pauls Cat, I had some pretty good fast runs with my Lynx too, both boats belting round and looking very stable.
Ed and Tony talked about their respective enjoyable visit to the International Model Boat Show, Tony then sailing his nice tug like model.
Don was there no boat butt kitted out with his super camera gear and took some photos some i hope can be loaded on the site too.
John came to watch, as the more foolish among us took to the water for the 1st 500 race at 10.30.
Phil like Canute in his chair at the waters edge, his grand son Piers entered for his first race, Terry the current champ, Vaughan with new servo fitted, Paul Quiet but ready to rock, Carl and myself apprehensive and awaiting Terry`s count down.
321 off like the marine charge of the Light Brigade fearless to the first buoy, Phil got stuck after 1 lap, Piers took my boat out but sustained great damage, Carl keeping out of trouble did well, Vaughan having some directional malfunction leaving Terry and Paul to fight it out in a close finish as follows Paul 1st, Terry 2nd, Carl 3rd, Vaughan 4th, Piers 5th, me 6th and Phil still stuck on the buoy last.
We then observed 2 minutes silence in reverence to the fallen at 11am Armistice.
Other boats were run and at 11.30 another 500 race.
Similar threats, banter, usual rubbish and good humour prevailed as usual Piers found his boat coming apart at the seam and almost sank, Carl lost his lid, Vaughan blaming another servo problem and ran up the bank. After a couple of laps we abandoned the race on Eds call as he could not hear the names to score so we regrouped and off again weth the following result. Terry 1st, Paul 2nd, me 3rd, Phil 4th, Vaughan 5th, Carl 6th and Piers last.
As we had had so much fun we had a final race, many excuses from split hulls to not much battery etc ensued. The results, me 1st, Terry catching up 2nd, Paul 3rd and Phil 4th, Piers and Carl not entering the melee.
Thanks as usual for Terry assisted by Paul putting the course out and the recovery boat and Ed for keeping score.
Pat.

Many thanks again to Pat for such a detailed and entertaining report. YES, hopefully Don will make good and send over some of the pictures.

I  have an update on our club Merchandise. the Car stickers have arrived, as well as some super little 20mm dia "glow in the dark" stickers with club  logo on too, ideal for evening sails as well as finding your kit boxes in the der der dark!
Just awaiting delivery of the sew on embroidered badges, then I will show all the pictures of the decals and badges together, along with the prices. 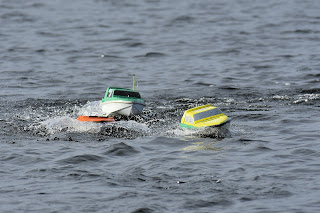 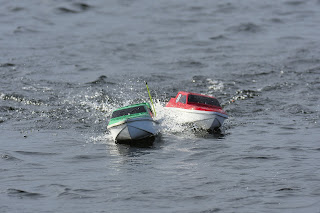 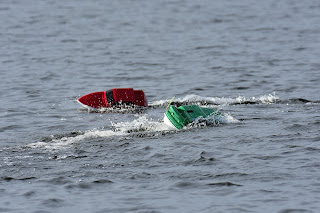 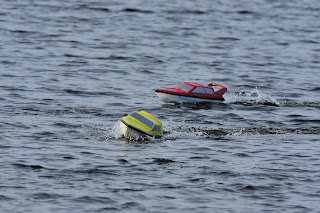 And Finally.... Something from Pat. [Well, Im not taking the blame]. 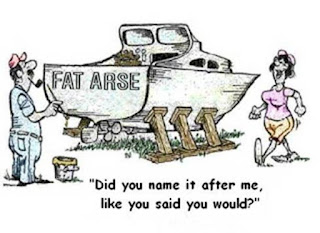