on March 11, 2014
On Sunday 9th March IWA Warwickshire Branch held a work party on the Grand Union Canal. The day was the warmest of the year to date and over 80 volunteers joined the branch to clean-up up the stretch of canal between Clements Street, Leamington Spa, and the Aqueduct over the River Avon in Warwick.
The day had not started well as the tug and hopper had been cast adrift from its moorings by thieves who had stolen the securing ropes. This did not deter the volunteers as once the craft had been retrieved everyone got to work with grappling hooks and litter pickers and collected enough rubbish from the canal and towpath to fill a hopper and car trailer. This was the biggest haul of rubbish IWA Warwickshire Branch has secured from a large clean-up event, which was largely due to the hard work of IWA members, Leamington Spa Army Cadets, students from The University of Warwick, a Warwick youth group and local residents.
The predominant items dragged from the canal were shopping trolleys, around fifty were recovered, and a selection of over twenty bicycles. Other more unusual items collected included, a ladder, a Heras fencing panel, traffic cones, a super 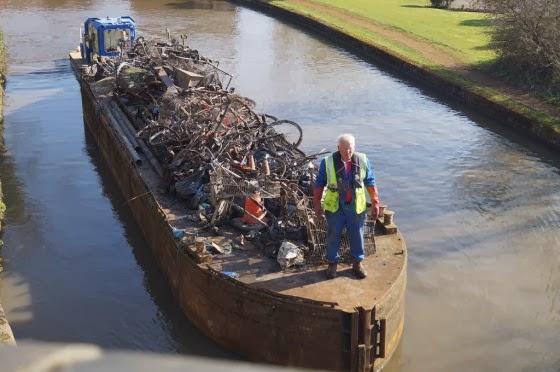 The hopper hold was quickly filled to its full capacity with the debris collected. As the hopper was taken back to Hatton, walkers on the towpath stopped to photograph the unusual sight and struggled to believe all the rubbish had come from the canal in one morning.
Overall, the clean-up was a great success due in no small part to the incredible response from the local community and the support from Canal & River Trust, in particular Steve Lambert who operated the tug and hopper.

Now thats a load and a half !

Anyone lost a bike lately?